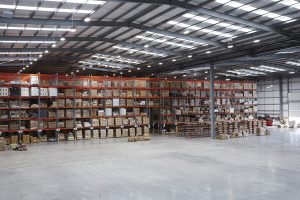 GEE Logistics, a full-service logistics provider offering haulage across the UK, sought to implement smart technology within their new warehouse in Southampton. Their aim was to minimise the facility’s energy consumption as well as optimise site operations by installing wirelessly controlled LED lighting to monitor a variety of environmental factors, including both natural daylight and space utilization.
Casambi, wireless lighting controls which operate on Bluetooth Low Energy (BLE) – the most popular and reliable low-power radio technology – was the obvious choice, especially since the timeframe only allowed for 3 months from initial design to completion. With Casambi installed inside of the luminaires, this tight schedule could be met without the need for time-consuming, additional controls infrastructure, and data could be securely extracted to the cloud.

Holders Technology Data Analytics, part of Holders Technology, was approached by Aurora Lighting to deliver the full suite of data services that GEE were seeking. The challenge was to set up a network that would facilitate energy management which was simple and user-friendly. Once GEE was able to optimise this facility and take control of their energy usage, this best practice could then be rolled out across to their other warehouses.

In order to retrieve data from measuring the pre-existing levels of natural daylight intensity inside the warehouse, sensors were mounted to measure ambient light levels. By modelling the amount of natural daylight, luminaires could automatically adjust to the required lux levels, ensuring an appropriate spread of light on the vertical planes instead of only the floor. Using the Holders Analytics dashboard which conveniently collates all the information on to a single screen, the client could then analyse how bright the natural lighting was at any time of day (see Figure 1). Consequently, the average usage of artificial lighting was reduced due to the use of daylight dimming as well as the fact that the luminaires were triggered less often. 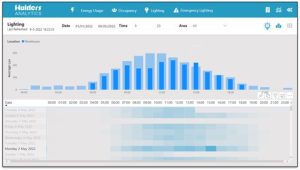 By incorporating Casambi PIRs into the luminaires, the client was able to track which parts of the warehouse were the most active. Holders Analytics used the PIR trigger data, gathered by Casambi, to visualise granular information by drilling down into several more layers to view different zones of the building, such as the racking area, for example (see Figure 2). Tracking these figures provided real, actionable insights for GEE as they were able to reconfigure the layout of their facility to increase the productivity of their working patterns. For example, stock that was most in demand could be relocated to a more accessible location which shortened picking routes, and in turn, reduced the frequency of luminaire sensors being triggered and therefore translated to additional energy saved. 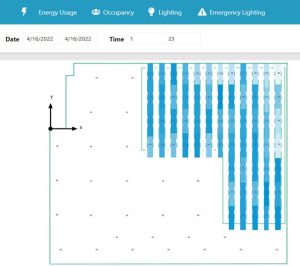 With an intuitive and simple user interface, the Holders Analytics platform allows its users to monitor live data and compare using benchmarking from historical readings. This data can be used by the client to make fact-based decisions, based on empirical data – rather than guesswork. As use of the site matures and changes, Holders Analytics allows the customer to keep up and continually optimise their estate in response. Only by taking a step back to look at the bigger picture and by seeing how a certain period of time compares with another, are you able to visualise and realise exactly how much energy can be saved by monitoring this information. Once small, incremental adjustments are made, very significant savings can be made which makes energy monitoring pay for itself many times over in the long-term.